100 years ago today on the 9th of june 1915, Lester William Polsfuss was born, better known as The great Les Paul.

As an avid radio listener, Les was in awe of the sounds of the guitar players over the waves, these were to be the waves that would wash over him, willing him to work hard on his paper route to get enough money together for his first guitar.

Relishing the replication of the riffs, Les became know as red hot red during his teenage years, together gripping his guitar and harmonica in hand, Les played at the packed out local drive-in.

Mounting the mouthpiece from his mothers telephone onto a broom stick and wiring it to her radio Les amplified his voice so even the pack of cats at the back, could hear him loud and clear.

Via the means of a hand written note, drive-in surfing to the front, Les was informed that while his voice and sounds of his harmonica were good, his voice needed to be louder!

So this got Les a thinkin’ and a tinkerin’….

Now wiring his guitar to his fathers radio and inserting an arm from his mothers phonograph, Les had plucked upon his first guitar, but it sounded far from what he had desired.

Profusely packing the guitar with a few of his sports socks, his dads old rags and his mums best tablecloth Les quickly realised that wasn’t going to work.

So he then furiously filled the carcass with a clay like substance, pouring in plaster of paris, until…..

That was to be the end of that guitar!

Les and his friends found a 2 foot piece of old rail and together with his marvellous made up microphone from his mothers telephone, along with a stretched string strapped onto the length of the rail, Les’s luck was finally in, as he had struck upon his sought after solid body guitar, less the feedback!

Les and his wife Mary Ford

Tape delay, phasing effects, multi track and overdubbing were just some of Les’s genius gifts to the music world, but with the art of overdubbing being his revolutionary sound on sound effect, he helped to change the recording process like nothing had before. 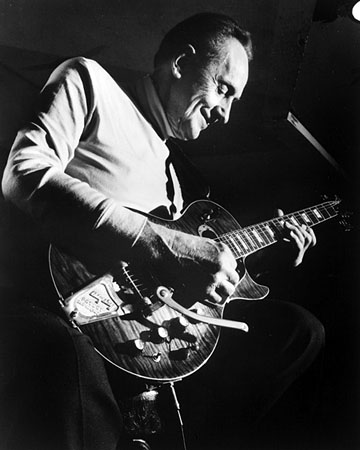 With Les Paul’s extensive musical career, masterful creations and his future musical inspirations… I feel if I were to set about writing it all out, I fear I too would be here still writing whilst celebrating my 100th year!

So i leave you here at the entrance to the site that officially documents the musical delights of the musical marvel, the Man and the Master, Mr Les Paul…

I'm a rockin' gal of Vintage glamour & an event & lifestyle writer, with a FATAL attraction to 1940's & 50's, I model pin-up to couture, an event socialite & vintage & retro stylist.